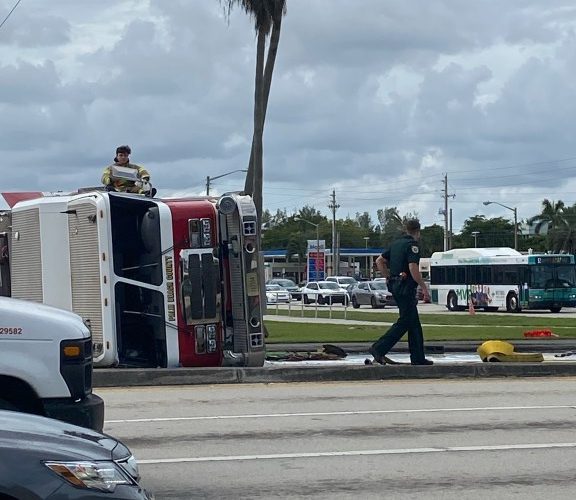 BOCA RATON, FL (BocaNewsNow.com)  — The driver of the fire truck that overturned near Powerline Road and Palmetto Park Road ran a red light and was broadsided by an oncoming pickup truck that didn’t yield, according to the crash report just obtained by BocaNewsNow.com.

The Palm Beach County Sheriff’s Office says Fire Rescue Driver Samuel Navarrete ran the red light on October 23rd while responding to a fire call. Multiple witnesses, including firefighters on the truck, a Delray Beach Police Detective in an unmarked car who happened to be in the area, and others confirm the police account.

As the Fire Truck drove through the red light and into the intersection, Philippe Pierre of North Lauderdale, driving a 2008 Toyota Tundra, approached from the truck’s left side — hitting its rear tire. The force caused the Fire Truck to capsize. While Pierre should have yielded to the fire truck, rescue personnel are still required to exercise care and caution when entering an intersection — even with lights and sirens active.

BocaNewsNow.com has learned that Palm Beach County “self insures” its fire trucks. The totaled truck is valued at $300,000.

Palm Beach County Fire Rescue Spokesperson Tara Cardoso has refused to comment on the crash since we started asking questions in the hours after the incident. Fire Rescue Administrator Reginald Duren has also not responded to requests for comment.

This is the complete text of the Palm Beach County Sheriff’s Office Report obtained by BocaNewsNow.com:

Other contributing factors for driver 2 of vehicle 2 is failure to yield to an emergency vehicle.”

The Palm Beach County Clerk of Courts reports that no citations were recorded in relation to the event. Palm Beach County Fire Rescue has not responded to multiple requests for comment concerning policy and procedure for drivers involved in a wreck while responding to a call.