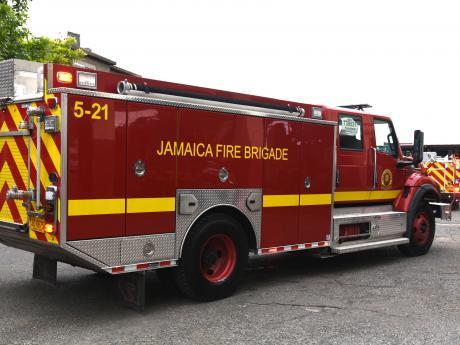 Minister of Local Government Desmond McKenzie is mourning the death of a firefighter who was killed after a vehicle crashed into the back of a fire truck in Ocho Rios, St Ann today.

The deceased man has been identified as 25-year-old Larenzo Douse, who was stationed at the Ocho Rios Fire Station.

The incident happened around 2:40 this afternoon along the Ocho Rios main road.

According to McKenzie, Douse was killed after a motorist overtook a line of traffic in the vicinity of Reynolds Pier and crashed into the back of a fire truck that was parked at the side of the roadway.

McKenzie said he was taken to hospital where he was pronounced dead.

“Larenzo Douse was a very young firefighter with his whole life ahead of him. He joined the Jamaica Fire Brigade at the tender age of 19 and served for six years, and just celebrated his 25th birthday on November 13. The grief at his terrible demise is being felt beyond the Ocho Rios Fire Station, where he was stationed, and goes all the way into the St Catherine Division, where young Larenzo’s father is a serving assistant superintendent.

“This is yet another instance of the tragedy, grief, pain and bitterness that is caused by personal irresponsibility, in this case by a motorist who overtook a line of traffic, rather than trying to reach a chosen destination by obeying the rules of the road,” lamented McKenzie in a statement this afternoon.

The local government minister is appealing to all road users to act responsibly.

“I have no words to demonstrate how I feel about this incident. I know that the commissioner of the fire brigade and a host of personnel are personally extending themselves to offer support. I can only say that I deeply grieve this destruction of a young life.”