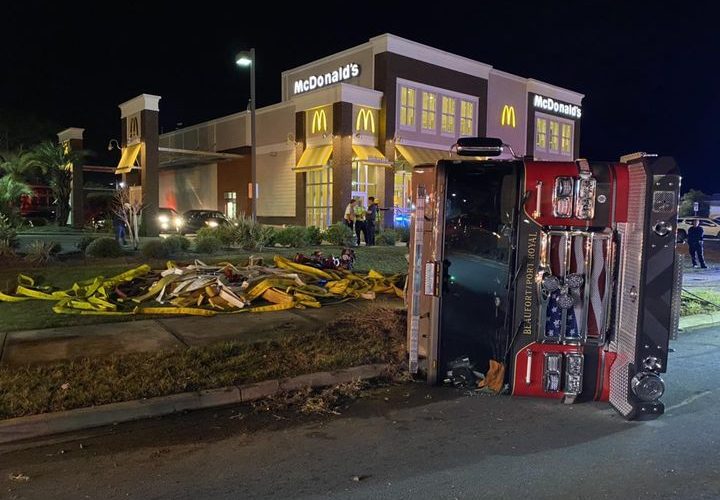 Beaufort/Port Royal Fire Department’s Engine 4 rolled over onto its side shortly after 7 p.m. while being turned off of Boundary Street onto Robert Smalls Parkway.

It appears the right wheel struck the concrete curb taking out a large chunk. Centrifugal force and weight of 43,000 pounds combined to roll the department’s newest truck. There were no other vehicles involved.

Two firefighters were on board at the time. Both were strapped in and were uninjured, according the Deputy Chief John Robinson. “They were a little shaken but nothing serious,” he said. “Both were ambulatory but we took them to Beaufort Memorial Hospital just to be sure.”

Robinson said the engine, a Pierce “Enforcer” was the newest engine of their fleet. “It’s not new, new but it’s less than a year old,” he said as he removed the American flag from the back of the engine. “I’m just glad nobody got hurt.”

Interstate Towing of Beaufort had to use their heavy duty tow truck to right the truck before it could be towed away. All the associated firefighting equipment was salvaged and placed onto a second wrecker to be used again.

Robinson said Engine 4’s sister truck, a nearly identical twin, will be here in February of 2023.

The accident investigation will be conducted by the S.C. Highway Patrol.