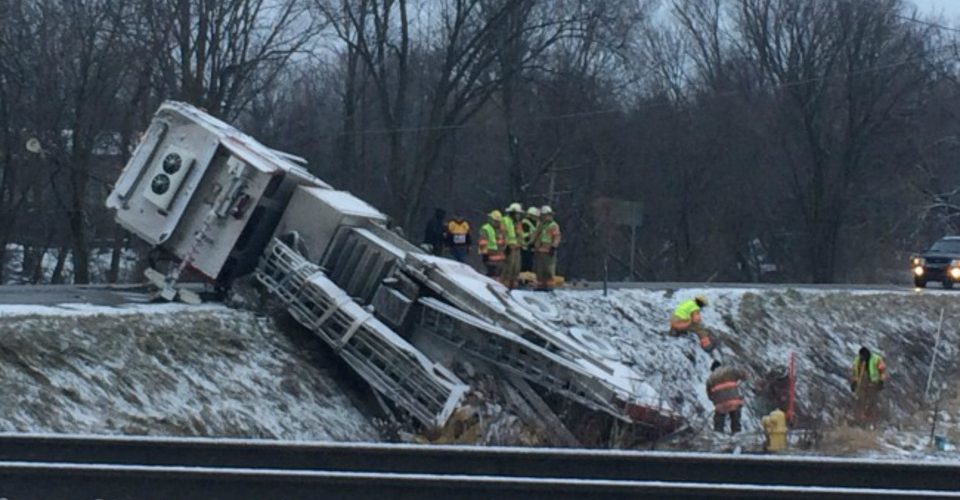 208 views
If you have looked at any fire service news websites with any regularity you realize that there has been a substantial increase in apparatus rollovers. Within the past few months, several departments in the State of Georgia experienced significant apparatus accidents. While you might believe that this story should be found in the fiction section of your local bookstore, unfortunately for those involved the incidents were quite the same. Each department referenced here rolled over their apparatus on the same roadway, at the same point along a bend in the road within a week’s time.

In previous articles that have been featured in Firehouse Magazine, several causative factors for these rollover events have been enumerated, such as lack of driver’s experience, lack of departmental training, excessive speed, weather conditions, poor road conditions, lack of accountability for poor driving practices as well as lack of leadership within the ranks to identify and address the importance of safe driving practices.

While each of these factors can be responsible for creating an aura of poor driving habits, particularly racing to incidents without due regard for the law and posted speed limits, there can be other contributing factors for the rash of apparatus accidents. It has become apparent that, in some instances, there is a correlation between the apparatus design, vehicle weights and operator training and these accidents.

During the past two decades, the Apparatus Architects have spent a considerable amount of time writing about and educating fire departments in safe apparatus design and apparatus purchasing strategies. With this in mind, during a recent apparatus purchasing seminar the class was shown a picture of a large, tandem-axle engine tanker with a water tower and extensive body compartments along with a roof-mounted light tower and other accessories (photo 1). Built on a 278-inch wheelbase, this vehicle was designed to be a multi-purpose “bring everything you can to the incident” vehicle. When asked, “What does this fire truck look like it is ready to do?” Almost always, someone will respond, “That truck looks like it is going to rollover.” So, this should give some indication that what we are doing here is not hard to identify. If you look at a picture in the classroom and can determine that the truck will likely rollover it tends to confirm that fact. One of my all-time favorite presenters is Gordon Graham and is motto is: “If it is predicable then it is preventable.” Some similar logic would be applicable in this case. 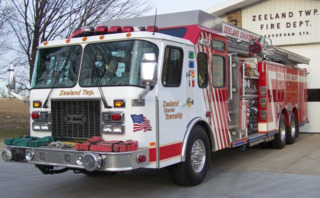 When asked, “What does this fire truck look like it is ready to do?” Almost always, someone will respond, “That truck looks like it is going to rollover.”MICHIGAN STATE POLICE

In a recent class that I taught, I had a fire commissioner jump up and ask, “How can manufacturers be allowed to manufacturer fire apparatus that looks like it might rollover? What about the standards? Aren’t they building to the standard?” Let’s start with the standard. The Apparatus Architects have been teaching for years that the NFPA 1901 Automotive Apparatus Standard is a minimum standard and does not imply that all current technology and best practices will be guaranteed. Any department’s apparatus committee should be raising the bar and aspiring to something greater and more in-depth than just having your fire apparatus built to meet the standard. I then tried to answer the commissioner by telling him that we do final apparatus inspections all the time and some completed units do not meet the standard. In short, how do you know whether your fire apparatus meets the standard during final inspection unless the apparatus committee has an intimate knowledge of that standard and can then check the completed unit against the standard to make sure it complies with the standard? So, in designing apparatus that will be less likely to rollover from a design perspective, the standard may or may not be decisive enough.

By the way, that apparatus in the photo that we showed the class, did in fact rollover just as some had predicted it might (photo 2). If it is predicable it is preventable. As with all fire apparatus accidents this rollover was investigated. I’m sure weather, road conditions and other factors were mentioned as contributing factors to the accident. Perhaps driver inexperience was mentioned or maybe the police report mentioned speed as a factor. But what was never mentioned as the root cause of this rollover was the vehicle’s design, weight or center of gravity. 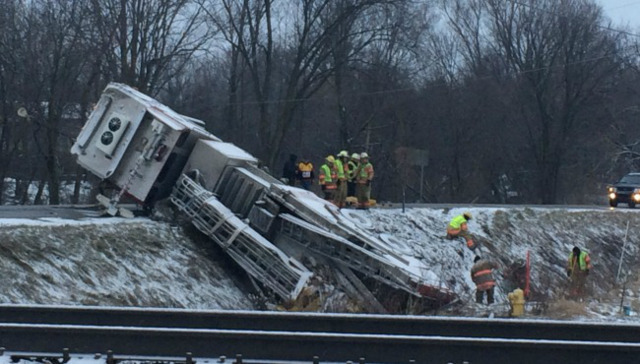 That apparatus shown in the photo 1 did, in fact, rollover just as some had predicted it might.MICHIGAN STATE POLICE

As an Apparatus Committee member what are some of the lessons learned:

Just because someone is willing to build it for you does not necessarily mean the vehicle will meet the standard, nor does it mean that the vehicle will be very safe to drive, operate or work on.

Having a combination vehicle capable of doing everything does not necessarily mean that it will do any one function especially well.

Having a combination vehicle capable of doing everything does not necessarily mean that it will safe to drive, operate and work off. Note the number of large engine apparatus at any national or regional fire conference with the height of the hosebed from the ground to the bottom of the hosebed. If your department operates where the first-due engine apparatus must provide a reliable water supply with laying a supply line, then hosebed heights and ease of operation may be an important factor for your committee to consider.

During the initial design process, the apparatus committee needs to reflect and confirm that the conceptual vehicle meets the mission of the organization and that current drivers and operators will not be intimidated to get behind the wheel.

During a fleet evaluation, we asked on chief how many firefighters were qualified to drive the 185-inch wheelbase, low-profile Engine Four. He replied, “Twenty-two…and everyone likes how it handles.” Next up was the larger tandem axle, top-mount engine tanker carrying 2,500 gallons of water and a twin-agent foam system. How many firefighters were qualified to drive Engine/Tanker 3? The chief said eight. Wow! Do they plan to have fewer incidents in the rural, non-hydrant areas? This could be problematic. Finally, the department operates an 84,000-pound mid-mount tower ladder quint. On the run card this rig should get out second for a structural assignment, but here the chief states they have only six personnel who are qualified to operate the tower ladder.

Then as a fire department, as an apparatus committee member, the next question to ask is why would you spend over a million dollars of someone else’s money on a fire truck only to have that truck remain in the station because no one feels comfortable or capable to drive it?

The apparatus committee must define the mission of the vehicle not missions.

Although this was a used apparatus that was being purchased, it must be weighed before you pay for and accept any piece of new or used apparatus. It is important that the apparatus is not overweight and that the weight on the apparatus is balanced across the entire chassis. This will eliminate expensive repairs and significant down time.

The apparatus committee, chief officers and all department operational personnel have an important stake in the outcome of the new apparatus. Thoughtful consideration to all aspects of vehicle design, including principal dimensions, axle loadings, center of gravity and equipment locations can have a tremendous impact on reducing the potential for apparatus rollover.